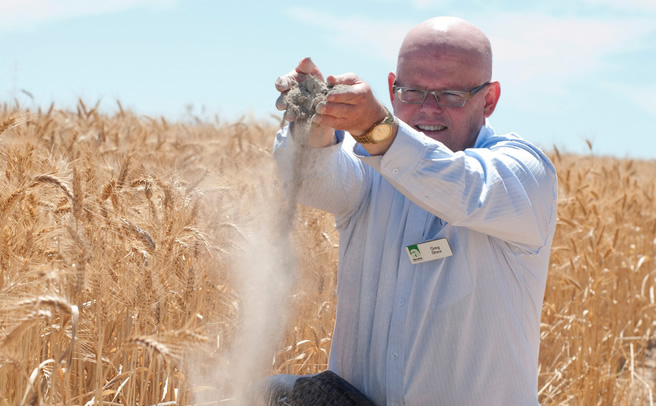 Farmers in the eastern Wheatbelt are hoping trials investigating the application of ultra-fine lime on their acidic soils will provide them with a bigger bang for their buck.

With the major cost component of liming being transport, farmers are looking for a greater impact from every load of lime they cart, particularly to outer areas in the eastern Wheatbelt.

The Merredin and Districts Farm Improvement Group will run a large-scale trial, funded to the tune of $20,000 by the National Landcare Programme and managed by Wheatbelt Natural Resource Management, with one of the treatments being an ultra-fine lime.

Another of the treatments will be the so-called secondary carbonate, sourced locally.

"Time is money in the eastern Wheatbelt and it is likely that the lack of soil moisture is slowing the dissolution of the commonly used limes in local soils," he said.

"Most growers in the eastern Wheatbelt are recovery liming rather than maintenance liming and so they want a fast response because yields are compromised until the acidity is corrected."

Agrarian Management consultant Craig Topham said he had held discussions with a NSW-based company in regard to other lime products, such pelletised lime and fine chalk-based limed products used by growers on the east coast and in Europe.

"These products are made from a chalk-based calcium carbonate, but it appears that they are used predominantly in the more intensive cropping industries," he said.

"Unfortunately, from my research, the economics don't stack up for growers in the northern and eastern Wheatbelt, but it does appear that a product like this is one of the most effective sources of lime because of its high neutralising value."

Mr Topham said Western Australia had one of the cheapest sources of lime in the world.

"Obviously the majority of the cost is freight, and there is a big difference in the lime quality between the various lime pits," he said.

"But growers can access the lime analysis information from each pit if they are looking for finer lime particles.

"The higher cost of a higher neutralising value lime can be offset in the eastern Wheatbelt with less freight costs, simply because you may be able to truck less lime and achieve the same results."

Mr Topham said anecdotal evidence was pointing towards lower grain screening issues for those growers who had paddocks with a long history with soil amelioration.

"A number of consultants are saying the same thing in this regard across the State," he said.

"Cultivation combined with liming is critical to success. Just liming, without cultivation, is a very slow return on investment."

Mr Shea said the Wheatbelt NRM/MADFIG trial results would provide critical information for growers, particularly those in low rainfall areas, to ensure they had a truck full of the most useful and economic lime.

He said the use of cultivation in conjunction with the lime application was another treatment that would be included in the trial.

"The game-changer with respect to the ultra-fine lime use, which is very difficult to handle, is the new spreader technology that is now locally available," he said.

Wheatbelt NRM's project delivery officer Tracey Hobbs said soil acidity in WA was estimated to erode potential crop yields by between nine and 12 per cent, at a cost of $500 million every year.