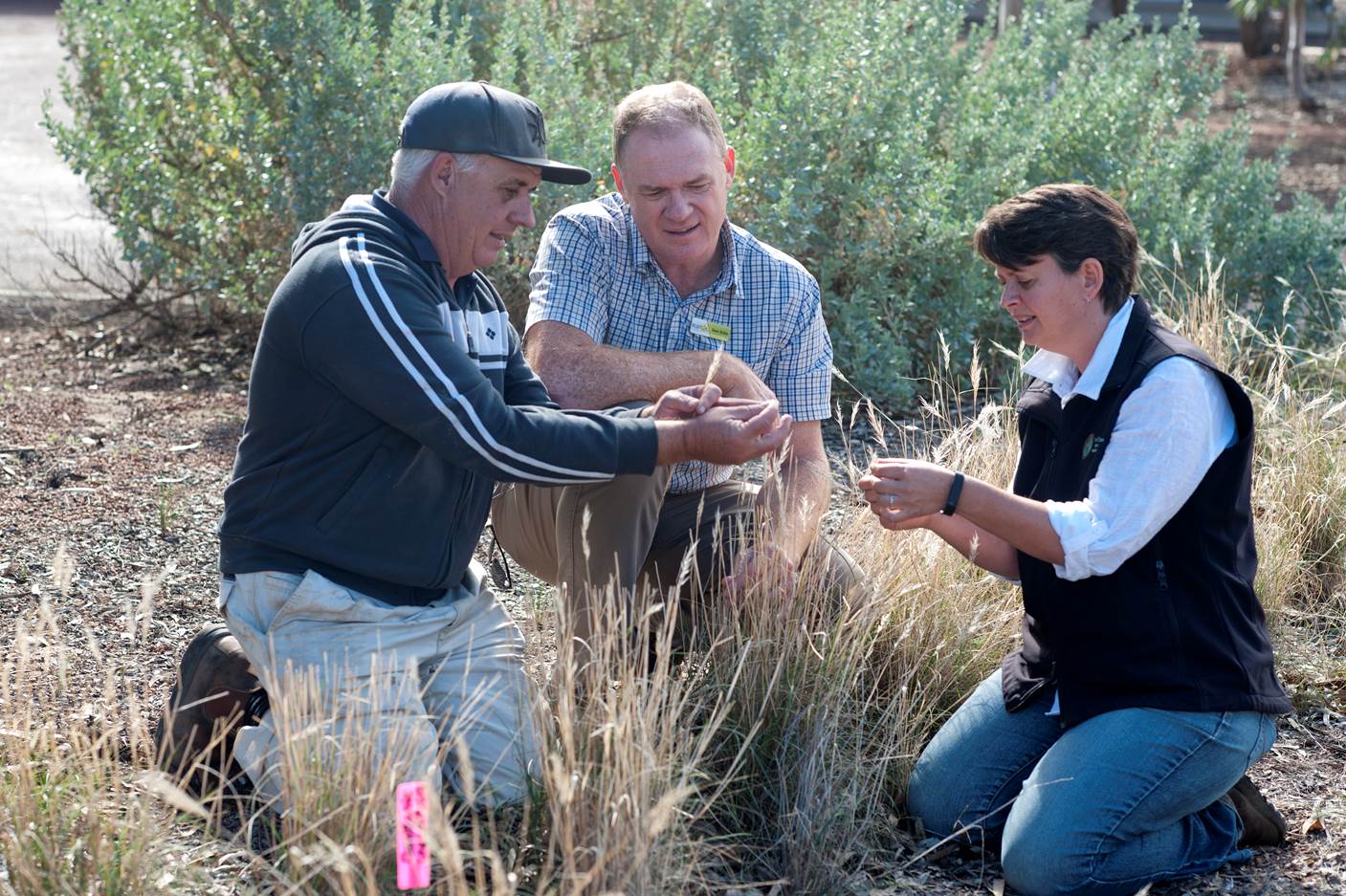 A group of scientists working in the Wheatbelt have turned back the clock in the search for a low input, summer food source for sheep.

Native grasses including wallaby, bandicoot, curly windmill grass and Murchison red grass are just some of the species included in the trial.

Native saltbush has already proven itself as a valuable tool for farmers on saline country, and it’s hoped these native grasses will follow suit targeting unproductive areas.

Behind the project is natural resource management group Wheatbelt NRM and Greening Australia, working together as part of the Australian Government’s National Landcare Program.

They’ve joined forces with Dean Butler, who owns country in the Koorda district, where he’s spent the past five years planting sandalwood on unproductive parts of his farm.

“My aim is to create a self sustaining grazing system within my sandalwood plantation, while we wait for the trees to mature,” Dean Butler said.

“We know native grasses have been around forever, but using them as a grazing tool and seeing how they perform in the plantation is something new.

“We want to see which ones best regenerate and spread happily through the paddock, and which ones are the more palatable for stock.”

Dean Butler initially planted the sandalwood to utilise unproductive areas on the property, which borders the edge of the Cowcowing Lakes system.

“We began planting sandalwood in 2009 and have now reached about 50 hectares in total,” Dean Butler said.

“Part of the plan is to plant the native grasses by direct seeding and establish a grazing system within five years.”

Greening Australia’s David Collins is providing technical support for the trial and said the trial site would be small, given the difficulty and expense in sourcing seed.

“Some of this seed can cost upwards of $22 per gram, which is why it needs to be hand planted for the trial,” David Collins said.

“The challenge with harvesting seed from native grasses is that these species aren’t like wheat where the plant ripens evenly.

“It’s a survival mechanism to not have all the seed ripen at the same time, hence seed collection is time consuming and labour intensive.

“In the future harvest techniques such as swathing may be used to overcome these characteristics.

“In the trial site the grasses will be established by direct seeding and tube stock, aiming for an established density of 60 plants per square metre.”

David Collins said compared with other feed sources like annual pastures, including ryegrasses, these native grasses were perennial and could respond to out of season rainfall and would regenerate under the right conditions with few inputs.

“There’s a lot of interest in native grasses because they are adapted to local conditions and can survive the climate,” David Collins said.

“But there’s also a lot of stuff we don’t know, including the length of time these seed stays dormant for and what triggers their growth including temperature, length of daylight and rainfall.”

Wheatbelt NRM’s project manager for sustainable agriculture Jo Wheeler said all this would be tested through the use of exclusion cages.

“By installing the cages, we can see which grasses are growing the quickest, and compare it with the grasses outside the cages, where the stock have access,” Jo Wheeler said.

“We need to quantify how useful these native grasses are going to be, otherwise farmers will opt for introduced species.

Jo Wheeler said assessments would be made through a visual rating, measuring the height of plants then taking dry matter cuts to work out kilograms per hectare of feed produced.

“We are also hoping to analyse the grasses for protein and digestibility and look at animal methane emissions,” Jo Wheeler said.

Planting of the eight native grass species on the Koorda farm will begin in a fortnight.

“This has been a great opportunity for Wheatbelt NRM and Greening Australia to work together on a project that reflects our shared vision for sustainable grazing systems,” Jo Wheeler said.

“We are also talking to Curtin University to hopefully get a masters project to work on this particular project.

“We are establishing sites across the Wheatbelt that highlight the variety of native plants available that can be used both for rehabilitating degraded farming land and as a strategic grazing tool.

“This is the first year we are having a serious look at perennial grass species in the hope they can become a part of this.”

Information on Wheatbelt NRM trial and demonstrations sites can be found at: http://www.agtrialsites.com/