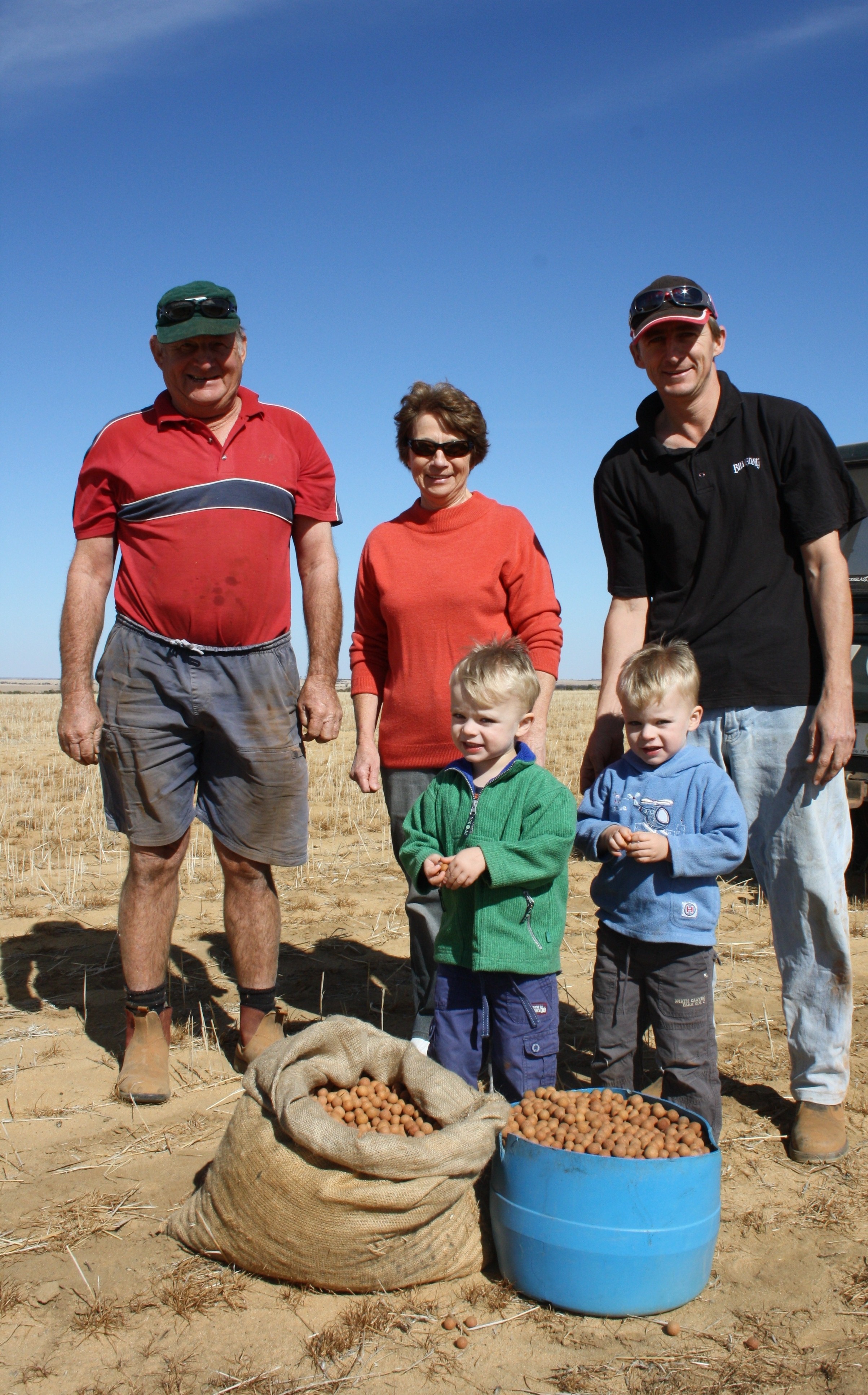 The temptation to continue cropping an unprofitable part of his Bencubbin farm was one of the motivating factors behind Lynton Beagley’s decision to plant Sandalwood. Stands of the native tree already existed over parts of the property, proving the species could flourish in an area often considered marginal. But the idea of starting a small plot has now grown to become part of a larger trial, investigating how farmers can lower the cost of establishing sandalwood plantations. “When we finish seeding, the next crop we put in will be 20 hectares of Sandalwood hosts,” Lynton Beagley said. “The trees will be put in on Wodjil soils that haven’t produced any good crops for years, in an area that has now become a problem for us because it is so windswept. “We need to remove the temptation to try and crop it one more time, and by planting Sandalwood, we have the potential to one day deliver an income from it.” Sandalwood is grown for its high value aromatic heartwood over a 20-year rotation, but there is also potential to harvest its oil rich nuts from as early as five years, as new products are developed. “For us, growing Sandalwood delivers an off-farm income that remains on-farm,” Lynton Beagley said. “While we wouldn’t be relying on this crop in the short term, in the medium to long term it’s a way to diversify. “We first became interested in growing it after a visit to Bob Huxley’s farm at Gabbin, east of Koorda.” Bob Huxley is the vice-president of the Australian Sandalwood Network, and is also involved in the Sandalwood trial. “Sandalwood need at least three to five host plants, mainly Acacia, to get their water and nutrients from, and this site will trial a combination of planting host seeds and seedlings,” Bob Huxley said. “While it’s not a new method, not many people have tried direct seeding in less than 300 millimetre rainfall zones. “And by doing it this way, the cost of putting in 20 different host species is significantly reduced. “If you’re establishing about one hectare with 1200 host stems, when you look at total site establishing from ripping, spraying etc… seedlings, contract planting it will cost you about $1200 per hectare. “That’s over a two year establishment period, including sowing the Sandalwood seeds in year two. “If you introduce direct seeding, you cut the number of stems per hectare in half. “500 stems per hectare plus seed mix will cost about $750 per hectare, so you get twice as much bang for your buck.” The site has significant meaning for natural resource management group Wheatbelt NRM, which is funding the trial. Project manager Georgie Troup said it meant Wheatbelt NRM would get twice as many hectares planted for each dollar spent. “Direct seeding makes the process of plantation establishment a lot cheaper, possibly even halving it,” Georgie Troup said. “It also means you get a more diverse mix of species in your plantation, which is good, because some host species grow rapidly but die in about eight years, while others are longer living. “By giving the Sandalwood a mix, they have a greater chance of survival. “The native trees send a web of roots out to more than one host plant, so they rely on different trees as the seasons change and the hosts grow old. “Originally, Sandalwood was planted on jam trees, which were vigorous growers but short lived with a life span of just 10 years. “This then threatened the life of the Sandalwood planting and forced the use of other species to help prolong the plantation.” Georgie Troup said two sites west of Bencubbin had been selected for the trial. “We want to use acidic, yellow sand classified as Wodjil soils, where Sandalwood thrives,” she said. As well as the Beagley’s, the Fitzpatrick family was also taking part. “At each site 7,500 mixed Acacia seedlings will be planted along with local Acacia seed, using a tree planter,” Georgie Troup said. The sandalwood is then planted one year later. Bob Huxley said the process of planting seeds and tree seedlings didn’t require any new machinery. “It is a process developed by UWA Associate Professor Dr Geoff Woodall and extensively trialled in the drier parts of the Wheatbelt,” Bob Huxley said. “We just use a Chatfield’s tree planter which is slightly modified with a direct seeding attachment,” he said. “When the trees are planted, a seed box attached to the planter meters out the seed and a couple of press wheels put it into the ground. “We use similar technology to our cropping machinery for depth control and seed placement.” Georgie Troup said the results from the trials would be used to encourage other landholders in the 300 millimetres or less rainfall zones to encourage others to plant Sandalwood. “By using this method its more cost effective and that in turn will help give the industry momentum with increased plantings,” Georgie Troup said. “Because the seasons have been so tight, farmers have not had the cash reserves to spend on natural resource management activities like planting trees. “This method helps to cut those costs.” Georgie Troup said the trial was part of Wheatbelt NRM’s Soil Conservation Incentive Program, funded through the Australian Governments Caring for our Country Program. For more information or to be involved in future projects contact Georgie Troup on 9690 2250. Bob Huxley – Gabbin between Koorda and Bencubbin – vice president of the Australian Sandalwood Network. Bob_huxley@bigpond.com 0419961254 Mark Fitzpatrick – 0428 848 068 or John Beagley – 9685 1247 Lynton and Melissa Beagley – yelgaeb@reachnet.com.au