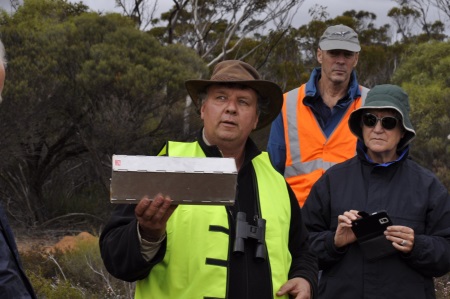 A small army of volunteer nature enthusiasts discovered evidence of the rare Western mouse in a recent Bioblitz near Lake Grace.

The Bioblitz was organised by natural resource management group Wheatbelt NRM, Dumbleyung Landcare Zone and the Department of Parks and Wildlife.

Wheatbelt NRM’s Leigh Whisson said the event was about encouraging people to study the environment and collect as much information as possible in a 24-hour period.

Mr Whisson said the most exciting discovery was evidence of the conservation dependent Western mouse.

“We found hundreds of chewed quandong nuts at specific feeding sites under dense shrubs,” he said.

“The Western mouse is the only species that feeds in this way and hasn’t been seen on this reserve since 1992.

“This is a good indication the species hasn’t been wiped out of this area yet.”

Volunteers used camera traps to photograph nocturnal activity, but were disappointed to find large numbers of foxes and cats in the region.

“This is not surprising and reinforced the need for landholders to carry out co-ordinated control programs, which Wheatbelt NRM can help with,” Mr Whisson said.