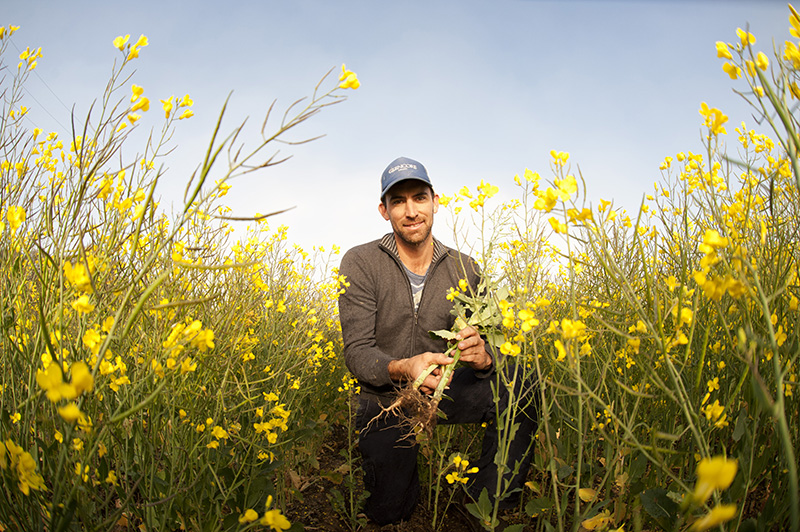 Bruce Rock farmer Stephen Dolton has had improved yields in his canola crop where lime has been incorporated using a deep ripper.

The results are starting to trickle in post-harvest on a trial to find the best way to apply lime on Wheatbelt farmer Stephen Dolton’s Bruce Rock property.

Throughout the Wheatbelt, soil acidity has been identified as costing WA grain growers nearly $500 million in lost production, or about nine per cent of the annual crop.

With nearly 60 per cent of his farm affected by soil acidity, the scale of the problem was one of the biggest motivators for Stephen Dolton when applying for funding to help carry out a liming trial on his farm.

He is implementing a trial with natural resource management group Wheatbelt NRM, to help research the best way to incorporate lime into the sub soil, rather than just the top soil.

“Like many other farmers, we’ve been spreading lime for decades, trying to fix the soil acidity issue,” he said.

“In some instances we’ve spread up to six tonnes of lime per hectare.

“But it’s the sub soil that we now want to address, which means using a mechanical means of incorporation.

“We needed the lime to start moving down the profile, by mixing the A and B horizon.”

The plots varied from a nil treatment to two tonnes of lime sand incorporated using a combination of a deep ripper and a one-way disc plough.

“We didn’t want to use a rotary hoe or spader, because they would have been to cost prohibitive, and the work needs, eventually, to be carried out on a large proportion of our farm,” he said.

The treatments were undertaken in the first week of June last year, with two crops now harvested from the trial plots.

“The first crop of Mace wheat we harvested from the trial yielded around two tonnes to the hectare on the deep ripped plots,” Stephen Dolton said.

“That was an improved yield of about eight per cent compared to the trial plots that had nil treatment.

“In the second year, we couldn’t see the same standout results from a single treatment but we think this had to do with the excellent rainfall throughout the growing season.

“We do know the ploughing treatments performed the best out of all the trial plots.”

While the trial is only two years into the three-year time frame, Stephen Dolton said the results using the deep ripper were becoming clearer.

The Dolton’s trial is one of 32 on-farm trials being implemented through Wheatbelt NRM’s Trials and Demonstrations program, funded by the Australian Government’s National Landcare Programme.

Helping to monitor the site has been the group’s project manager Dr Fiona Brayshaw.

“Soil testing is an important criteria and will be carried out on each plot twice, at the start and completion of the trial.,” Dr Brayshaw said.

“Improving soil management is one of the four themes funded under this program and the results of the trials are generating a great deal of interest amongst the farming community.”