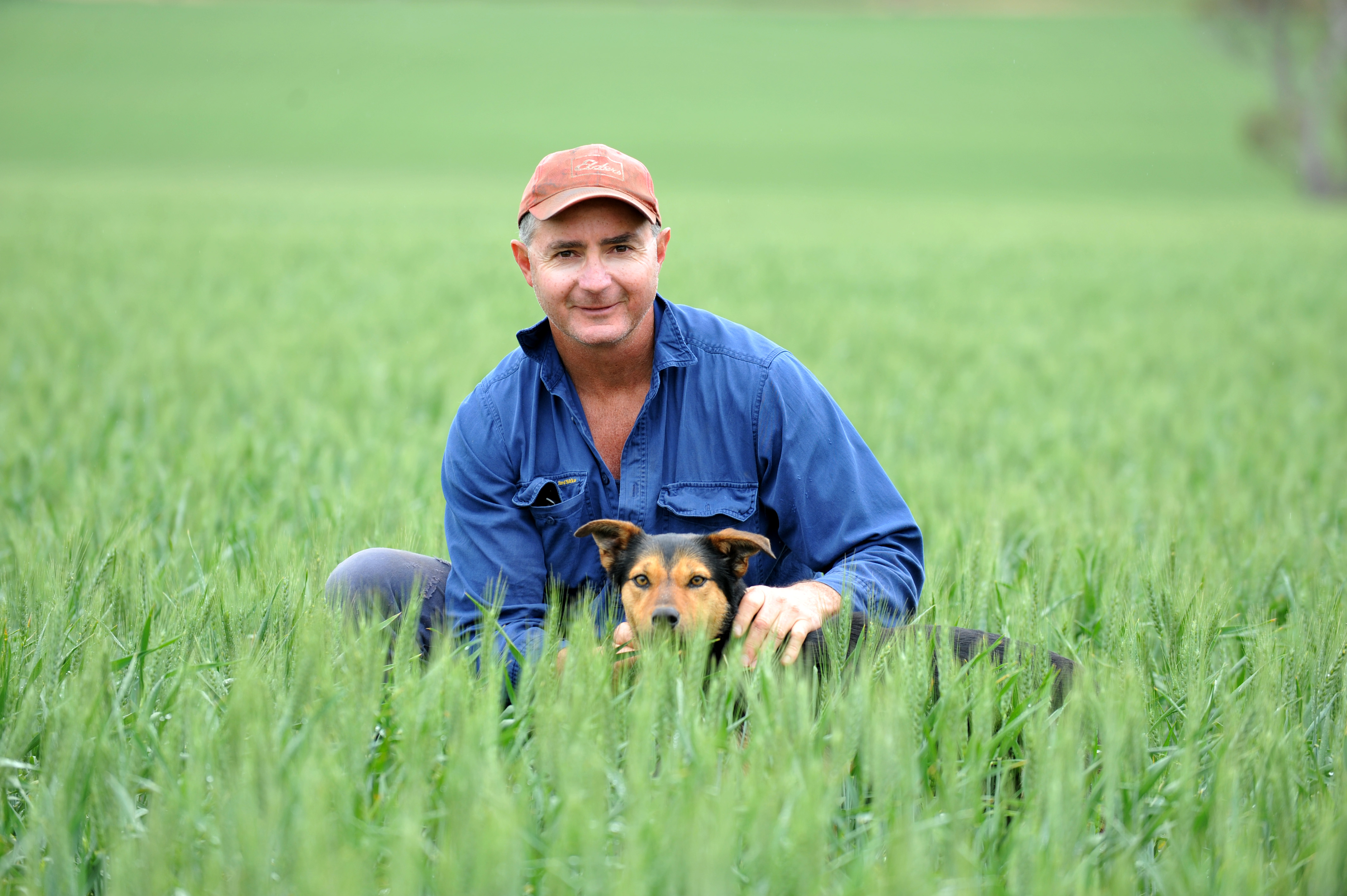 The slow creep of non-wetting soils across Damien Leeson’s Wheatbelt farm has prompted a major trial into how to address the problem.

The fourth generation farmer has been noticing year after year, non-wetting soils consuming more and more of his Goomalling farm.

The predominantly yellow and white sandy soils refuse to hold any moisture, and are a problem for many Wheatbelt farmers.

It’s estimated about two million hectares of the South West land division of WA were affected by the condition, which leads to increased water run-off and poor crop establishment, increasing the risk of wind erosion.

“Non-wetting soils are an increasing issue and we’ve been playing around with a couple of different methods trying to address them,” Damien Leeson said.

“We’ve tried claying in combination with spading, spading by itself and several biological means to see if we can improve the wettability of the soil profile,” Damien Leeson said.

The group is pitching in to the tune of $24,000 through its Soil Conservation Incentive Program (SCIP).

Already $4 million has been spent on SCIP projects in the Wheatbelt over the past four years, as part of the Australian government’s Caring for our Country program.

The funding has focused on eight trial plots to find out what farming practice was potentially the most successful in tackling non-wetting soils.

The plots are 45 by 400 metres, using Wyalkatchem wheat planted in the first week of June at 75 kilograms to the hectare with 12 inch row spacings.

A NPK fertiliser at 60kg/ha was used at seeding with 30 litres of UAN down the tube. Damien Leeson said he hoped the trial would develop a solution to tackle non-wetting soils.

“I think the problem could be getting worse because of our farming practices,” he said. “This includes cropping wheat on lupin rotations combined with no-tillage.

“The rate of decomposing plant matter left on the surface of the soil is very slow and in some cases non-existing.

“This is still only anecdotal, but some of the research is heading in that direction.

“No-till has been very good for us, but we have to ask the question, have we been doing it for too long?”

“The hydrophobic substances leaching out of the lupin stubble could be more in comparison to cereals or canola,” HF De Wet said.

“The problem could also be compounded because lupins grow better on sandy soil types that are predisposed to becoming non-wetting.”

To try and overcome the problem Damien Leeson said he’d already experiment with claying and spading.

“The cost of mould board ploughing and spading is more attractive than claying,” Mr Leeson said.

“We’re talking about $120 per hectare for mould board ploughing versus the combine cost of claying and spading at $900 per hectare.”

“But these practices should be seen as supporting the long-term adoption of no-till.”

The dry years have also seen other changes on the Goomalling farm, including a drop in fertiliser use of 20 per cent in phosphorus and 10 per cent in nitrogen.

Wheatbelt NRM’s Dr David Grasby said the value of the trial stretched beyond the Goomalling district.

“This project is testing a wide range of farming practices and already we can see visually the mould board ploughing site is standing out,” Dr Grasby said.

“But we have also learnt that mould board ploughing does expose some of the land to wind erosion and can bring acidic sub-soils to the surface, so needs to be approached with caution.”

Both Damien Leeson and agronomist HF De Wet said that visually, the plot of mould board ploughing was definitely more aggressive.

“I would almost say that the ploughing definitely improves the water penetration, but for how long this will last, remains to be seen,” HF De Wet said.

“By doing the water drop penetration time on the soil in each of the plots, the mould board plough site was absorbed within a second.”

The trial using a rotary hoe took about 10 to 12 seconds for absorption and all other treatments longer than a minute.

According to literature, if the water drop penetration time on the soil takes longer than 60 seconds, the soil is classified as water repellent.

HF De Wet also tested root growth, finding that on the mould board plough plot root growth was to a depth of 40 centimetres, the rotary hoe was to 25 centimetres and the remaining plots were all about 12 to 15 centimetres.

He said while the true results would be known at harvest, it was hoped the trial could be carried over a couple of years to get a better picture.