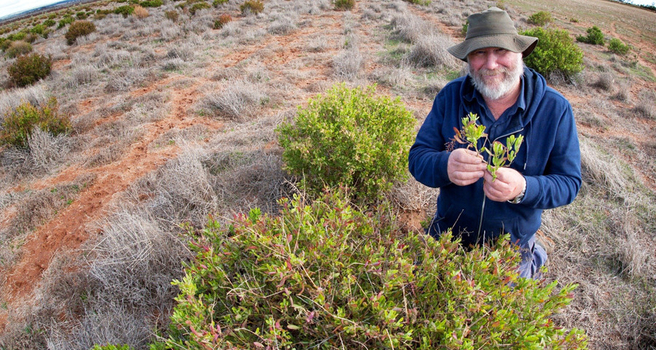 He was continuing to hand feed all of his 1400 Merino ewes and Poll Dorset Cross lambs, in the hope the weather would soon turn.

“In the lead up to this rain it was a dust bowl,” Murray Clements said.

“We’ve been relying on our forage shrubs including saltbush and rhagodia as well as feeding out grain and hay.”

He poured out 32 millimetres of rain for the week, which he said came just in the nick of time.

Helping him through the dry times has been an investment into forage shrubs with more than 200,000 planted over the past ten years on his property south of Doodlakine.

Murray Clements has been a strong proponent of planting forage crops, particularly on saline and unproductive land, and has come out in support of a new incentive program encouraging others to grow the trees.

“I’ll now continue to use the forage shrubs until my pastures are ready to sustain sheep grazing on them,” Murray Clements said.

“They‘re a valuable part of my farming system.

“Without them we’d be farming a real dust bowl, the forage shrubs also control erosion from the wind, so the countryside would be in a sorry state if we didn’t have them.”

The project coordinator Dr Fiona Brayshaw said the program worked by offering subsidies on forage shrubs like saltbush and rhagodia, as well as sandalwood host trees.

“We will be directing approximately $120,000 from the Australian Government’s National Landcare Programme over the next three years into community grants and will be supporting advocates like Murray to mentor successful applicants.”

“A recent DAFWA report in the northern agricultural region suggested that on average eight per cent of cleared farming land was consistently unproductive,” Dr Brayshaw said.

“These are the areas that might be more profitable under forage shrubs or sandalwood, rather than cropping.”

“The program will also involve master classes that will focus on how and where to implement these systems on farm to boost overall farm profitability.”

“Saltbush and other species combined can help meeting the energy and nutrient requirements in autumn and early winter where the current annual pastures are lacking,” Dr Revell said.

“Forage shrubs are most valuable when you have just had rain because you want to keep the sheep off the pasture to give it a chance to grow and set itself up for the rest of the year.”

For more information on the Perennials for Profit program or if you are interested in becoming a mentor contact Wheatbelt NRM’s Fiona Brayshaw on 9670 3100.

The closing date for applications is Friday 24 July 2015.