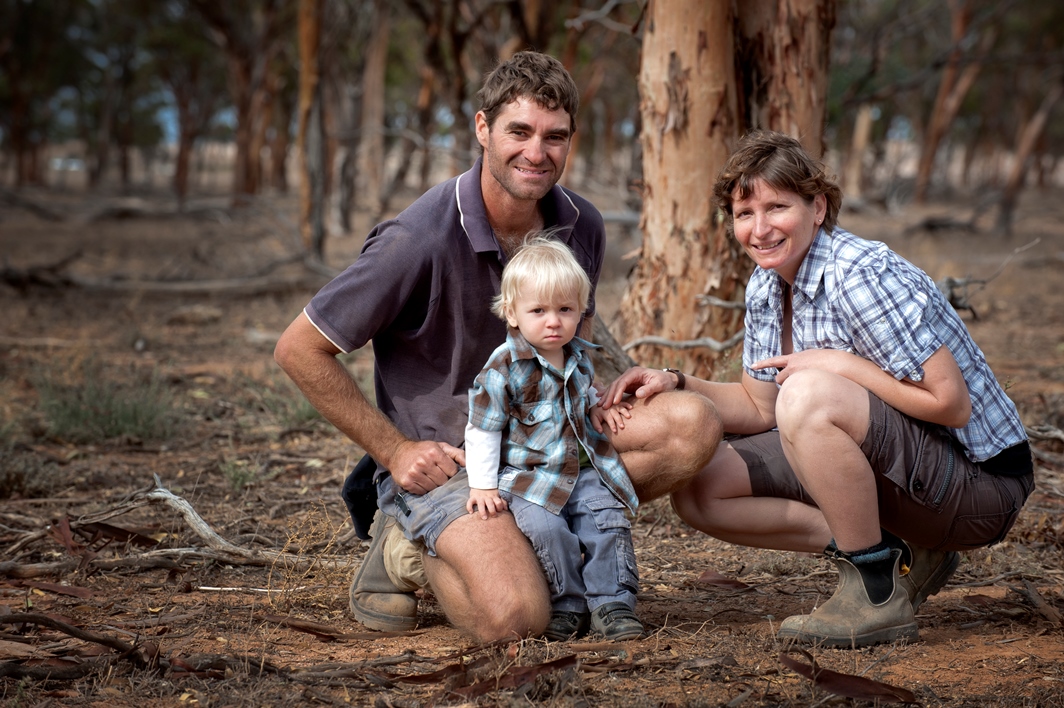 Cam and Meg Gethin now more than ever value the few patches of bush land left on their Hines Hill farm. Their farming land stretches across more than 3000 hectares, with pockets of gimlet and salmon gums. And they can the see the value these last stands of remnant vegetation are having on their surrounding cropping country. The Gethin family is one of 10 landholders who have successfully applied to Wheatbelt NRM’s most recent Bushcare grants program, funded through the Australian government’s Caring for our Country. These landholders, to help them preserve remnant vegetation for conservation purposes, will access a total of $143,000 for fencing, weed and pest control. “My grandfather was allotted some of this land after returning from the war in 1947 through the war service scheme,” Cam Gethin said. “A lot of the land was cleared long before Meg and I took over, and if the remaining patches of bush land were left to die now, the land would turn salty very quickly. “In other areas of the paddock this is already happening and we’re having to cut it out of production and plant it to salt bush.” Through the grant, Cam and Meg will receive $2750 to go towards fencing the area to stop stock getting in. “Sheep have already taken out the understory, taking bark from trees,” Cam Gethin said. “We run 850 ewes, but with the number of droughts we’ve had through here, we wouldn’t want to stock more than that, because there isn’t enough stubble to help retain fragile soils from blowing. “Wind erosion was our biggest disaster in 07-08. “We’ve already fenced remnant vegetation on the property before, and the understory re-grows very quickly and gets the ecosystem going again.” Wheatbelt NRM’s Rebecca Palumbo said the program had only been running for two years, but in that time, landholders had undertaken about 30 projects. “That’s roughly more than $300,000 spent, but because landholders have to match or provide in kind labour, that figure is closer to half a million dollars,” Rebecca Palumbo said. “It’s the only program of its kind in the Wheatbelt and fills a big gap because no other grants program is available for farmers to do this type of work. “There would be less than five per cent of original vegetation left since clearing for farming began more than 100 years ago. “This makes even the smallest stand of native vegetation crucial for wildlife and why we work hard to get the funding from the Australian government, so it can be utilised in areas that would otherwise get overlooked.” Cam Gethin said this particular patch of remnant vegetation was important because of its proximity to the Cohn Creek drainage system, which comes from Merredin town site, and then flows into the Baandee Lake system. “These patches of bush are important for native woodland bird life and other native fauna, which occupy the lakes,” Cam Gethin said. “We eventually would have fenced it, but with the help of this grant it’s happened a lot sooner.”