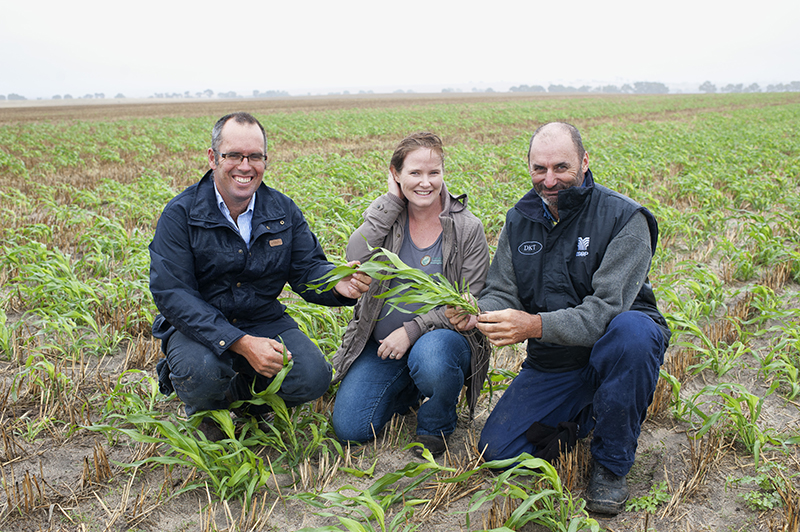 Wheatbelt farmer Stephen Smith couldn’t have chosen a better year to trial a summer cropping program on his Cunderdin farm.

But despite receiving almost half of the farm’s annual rainfall quota in January, these crops won’t be harvested for grain.

The four winter cropping varieties sown in the summer months will be grazed for livestock feed to help bridge the Autumn feed gap.

With more than 170 millimetres tipped out of the gauge for 2017 alone, Stephen Smith’s punt on planting the five-hectare site in December already looks like paying off.

He’s working with natural resource management group Wheatbelt NRM and AgInnovate farm consultant Jonathon England, with the plan to use the site as a green fodder crop for the family’s 700-head mob of Merino ewes due to lamb in May.

“I’ve always mucked around with the idea of growing crops in the summer, so this demonstration site progressed the concept and was about assessing the risk and the best varieties to grow,” Stephen Smith said.

“If we look back at our long term rainfall records, for every four out of seven summers we’ve recorded more than 40 millimetres of rain.

“With this five-hectare demonstration site we’ve chosen Hyola canola, Super Dan sudan grass, Global Sun which is a legume and the Manning winter wheat variety, all planted on December 15th.”

The project was being replicated at a farm further south in Pingelly (who’s farm – INSERT), with funding through the Australian Government’s National Landcare Programme.

“We’re seeing more and more climate variability over the summer months, and this January was a case in point,” Fiona Brayshaw said.

“These two demonstration sites provide a potentially more sustainable way to feed sheep over the summer months and help farmers take advantage of this climate variability.

“Some farmers are already growing millet and brassicas as a summer cropping option, but we’d like to extend that even further.”

AgInnovate farm consultant Jonathon England was driving the trial, and had already begun calculating the productivity of each variety.

“We’ve done testing by counting how many plants were growing per square metre and measuring their weight to calculate the biomass,” Jonathon England said.

“Where the crops have had a good germination, we’ve measured up to 10 tonnes to the hectare.

“In the Cunderdin crop of Super Dan we calculated 4.5 tonnes to the hectare biomass.

“This is a good result given it was planted in December and nothing normally grows over summer.” 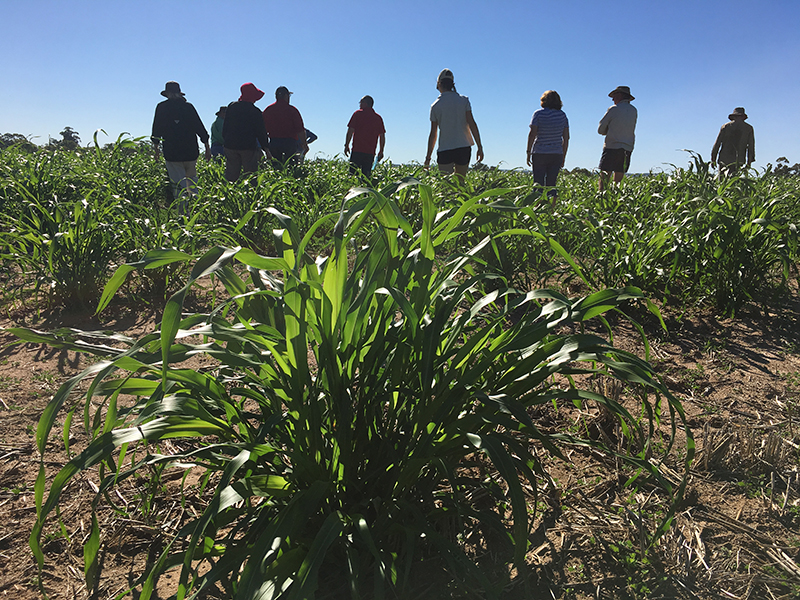 Jonathon England said varieties like the Super Dan were chosen because of its low levels of prussic acid, toxic to sheep.

“The Super Dan also has a more finer leaf than millet and was more suited to grazing,” he said.

“The Global Sun legume is a new variety and if it survives can put some nitrogen back into the system, increase soil biology and provide a disease break.

The Manning winter wheat was chosen because it is a long season variety and could potentially be carried through as a crop to harvest.”

While Stephen Smith would like to eventually extend the trial out from five to 50 hectares, he admits to some challenges.

“Apart from the obvious risk of not getting enough follow up rain, other problems would include how to manage melons and cowthrop,” Stephen Smith said.

“At this stage the best varieties look like being the Super Dan or the canola.

“We’ll start grazing it in early March and then begin to assess the site after it is grazed over the next three months.”

All crops sown with 6.5kg/ha nitrogen, 8.5kg/ha phosphorous and 3kg/ha of sulfur plus trace elements.